This was by far my most favourite thing I had done in this house! I knew the second I saw that hallway that I wanted stripes. This project did take some time but it was more than worth it! 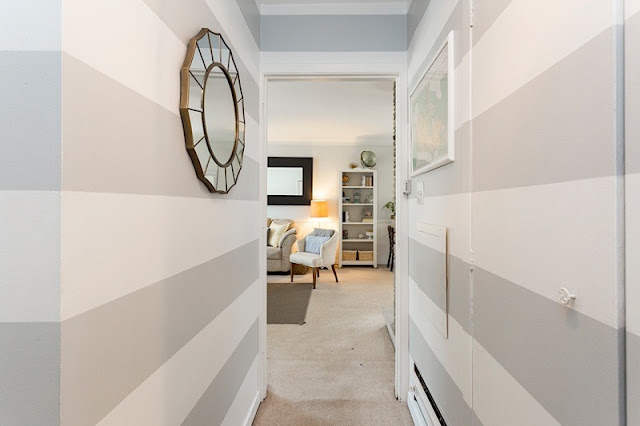 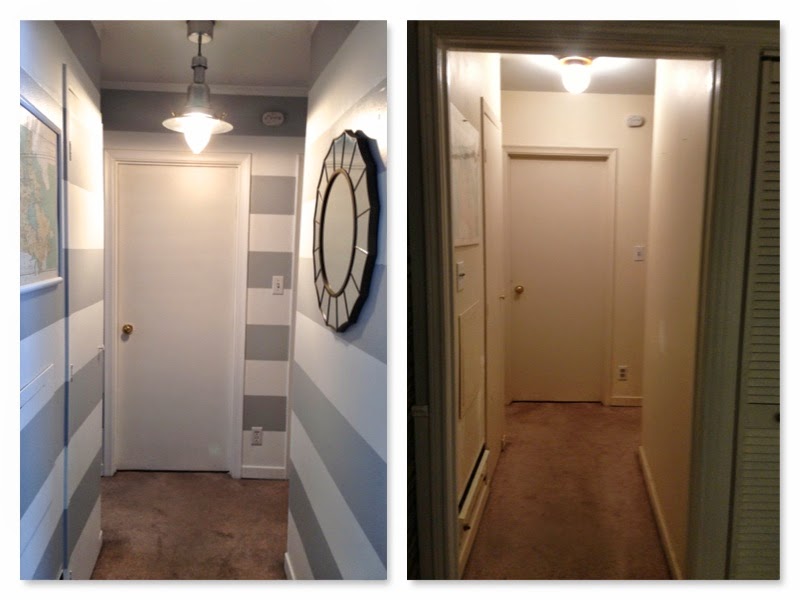 Remember when I said that the house was painted all a yellow cream... well here it is again, not only the walls but also the trim and ceiling! Best part was painting everything white and not having to worry about trim or ceilings. 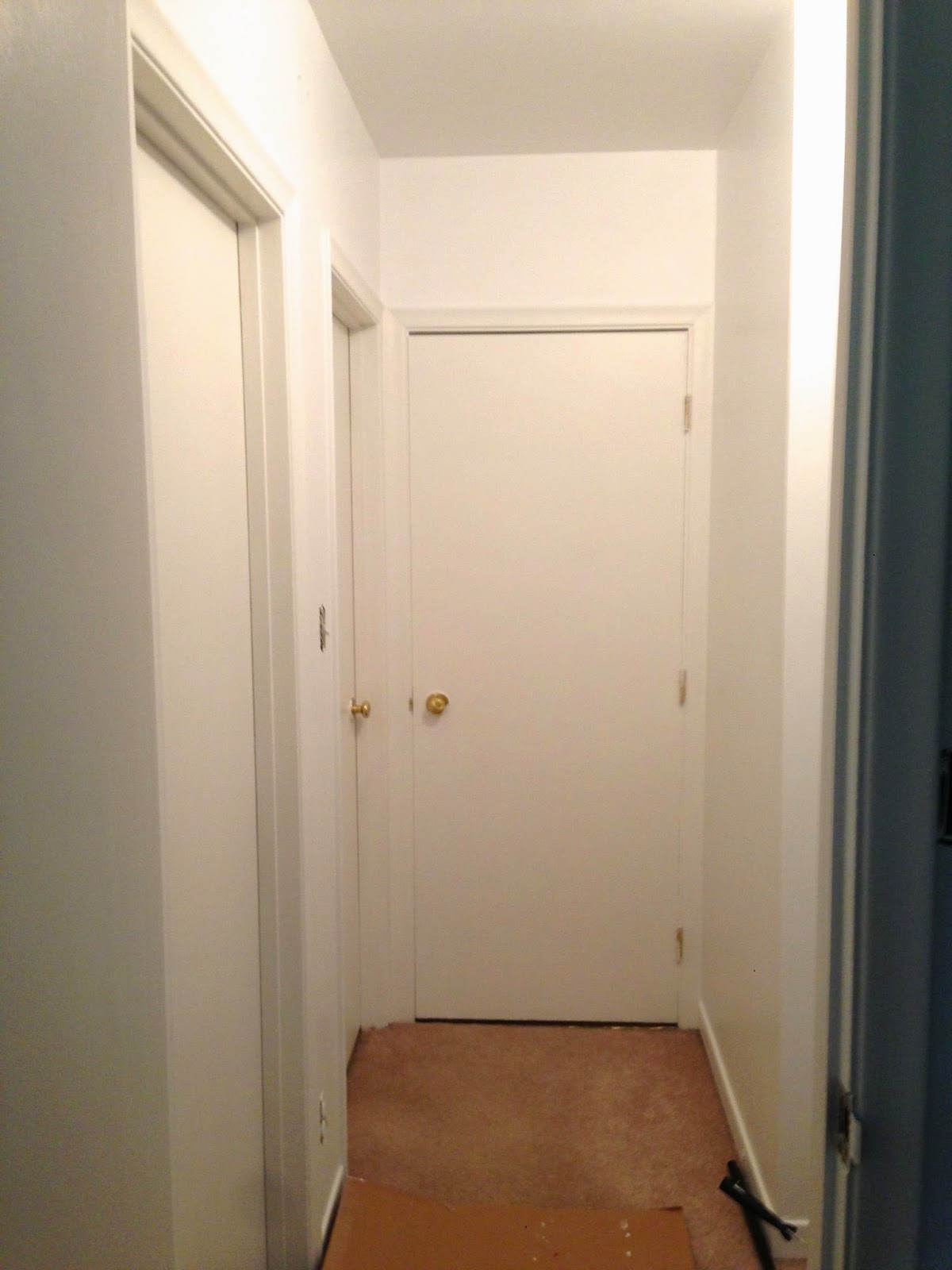 Once everything was painted a fresh white it was time to get started. This hallway had been on my mind for a while, it needed to come out. I had an idea of generally how thick I wanted the stripes to be. First I measured the wall starting just above baseboard trim which was 92 inches
I ended up doing the stripes 9" each.
92 divided by 9= 10.66
There were going to be just over 10 and a half stripes in total. Try and stick with even numbers so you have the same amount of stripes for each colour. 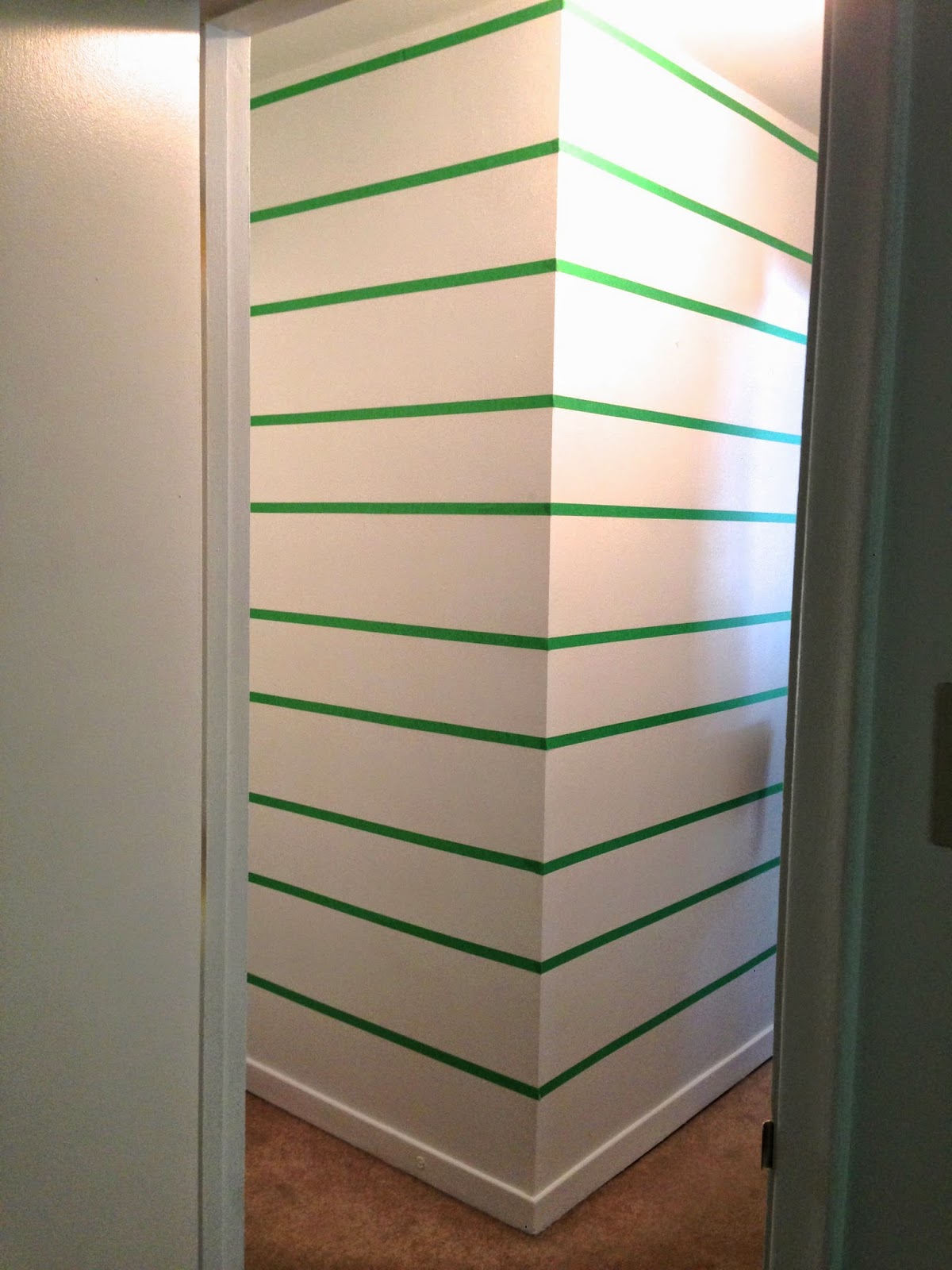 This is by far the hardest and worst part of this project; the measuring and taping.
I did not use  a chalk line or laser to do my lines. I did it the good old fashioned way with a yard stick and a pencil. Why?  Because I don't have a laser and I didn't want to use the chalk in case it affected the paint.
Now this house wasn't even close to being level. There were so many times that I wasn't convinced this would work. The key is to put a mark on the wall at 9"above the baseboard. Then with a level on the top of the meter stick draw a straight line. TRUST the level and not the floor or ceiling.
Once your lines are on the wall its time to tape. This is another crucial part, the tape has to be perfect.
Make sure you write on the tape with an arrow telling you which colour to paint on each side of the tape. (Grey>    <White) That way you wont accidentally paint the wrong stripe. 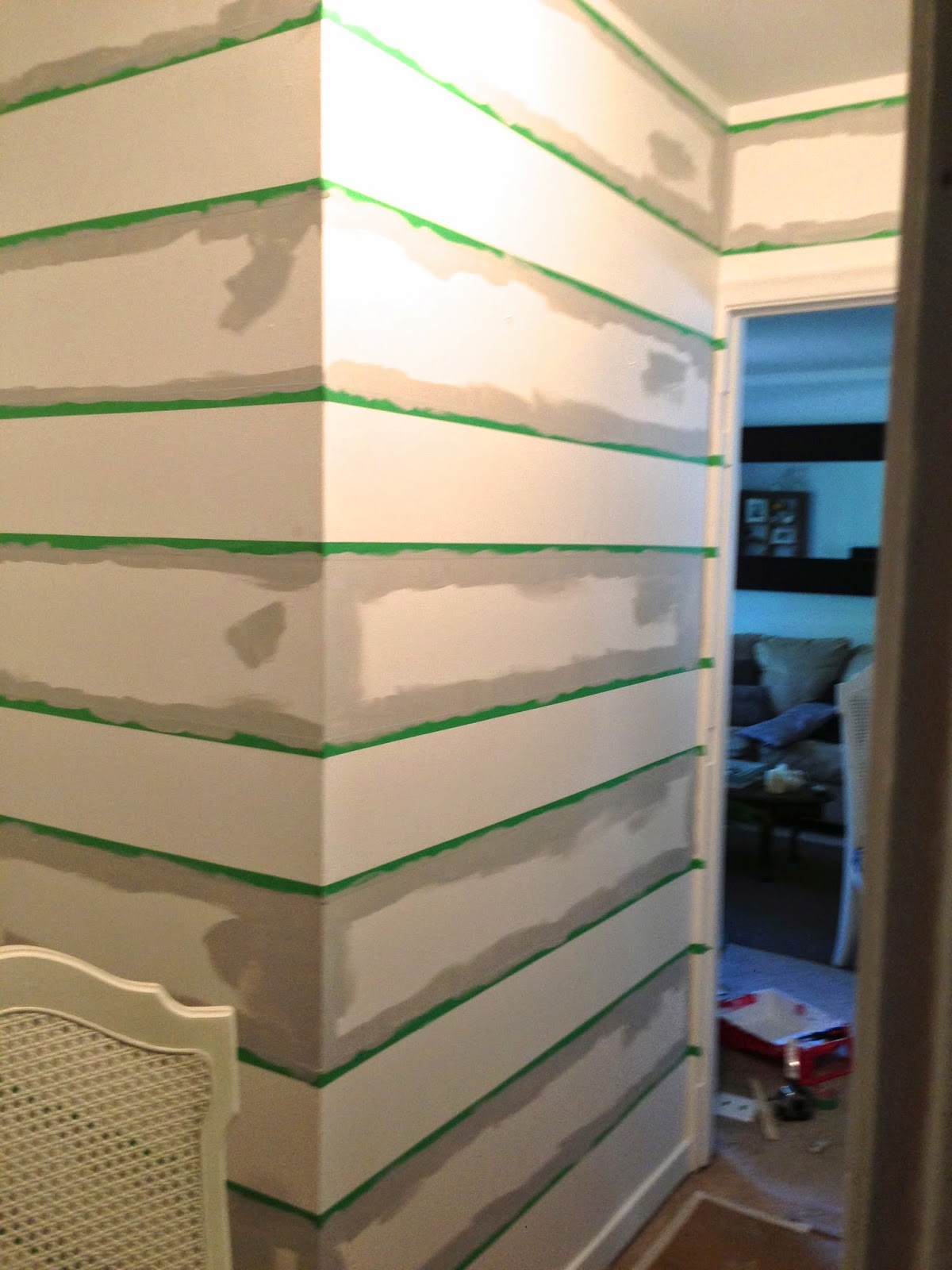 Once you have the tape on the wall go over it with your hands several times and make sure it is secure to the wall and there are no air bubbles. Then you can start painting with a dry brush over the tape, insuring you wont have any surprises when you pull off the tape. Two coats and some minor touch ups were needed. 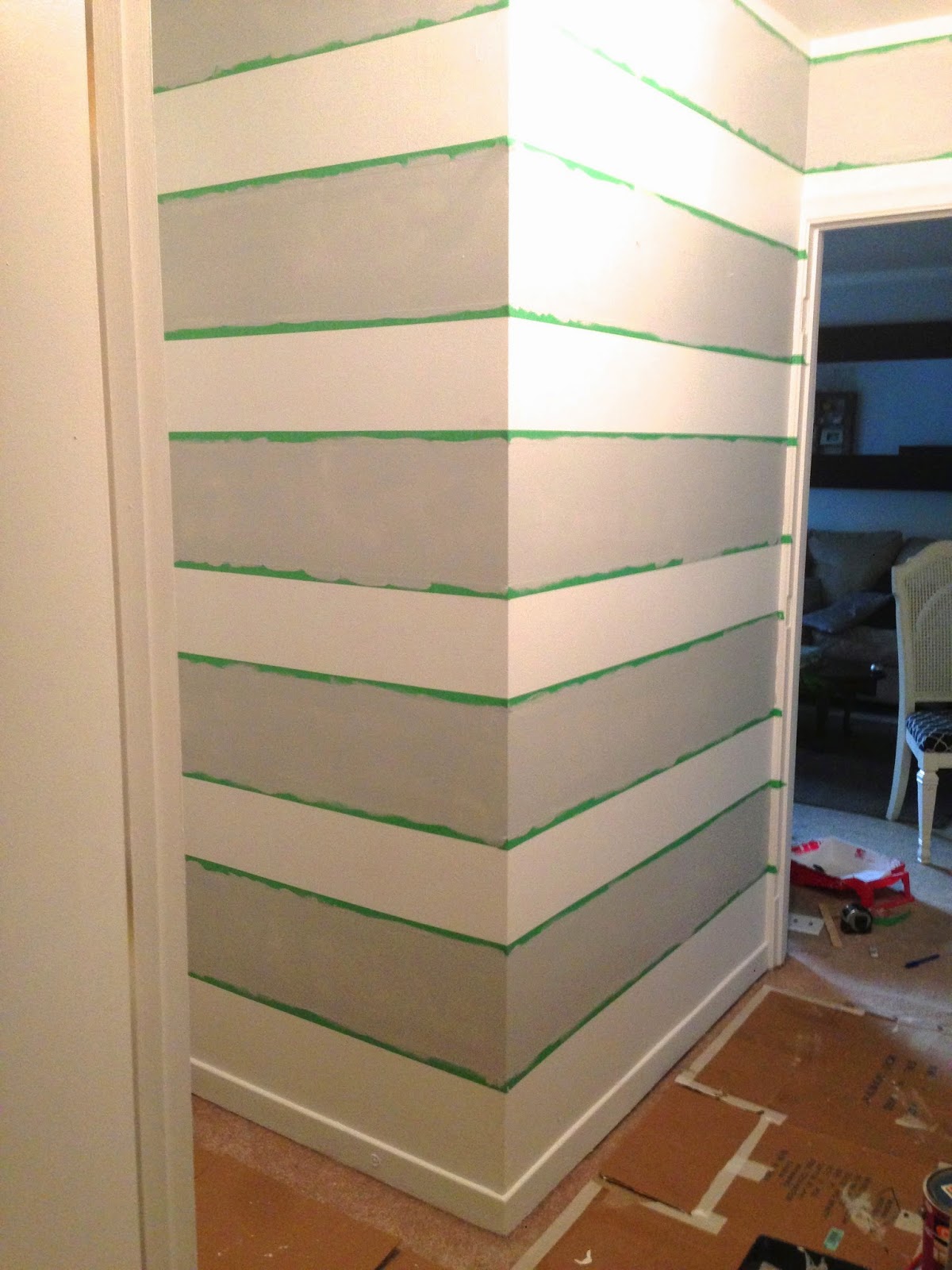 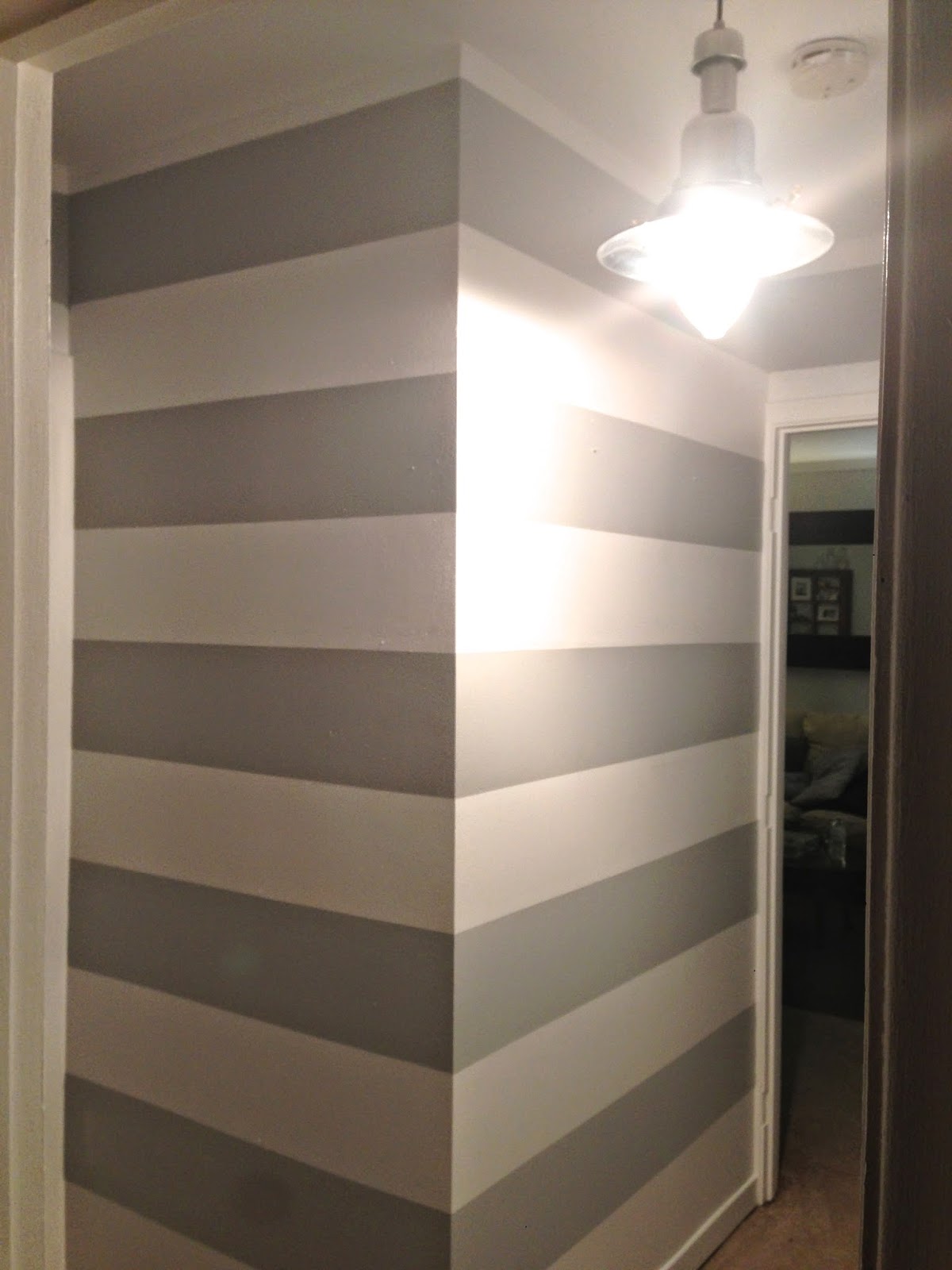 The paint I used for the grey was Universal Grey by CIL. This is a true grey colour and it turned out absolutely amazing! 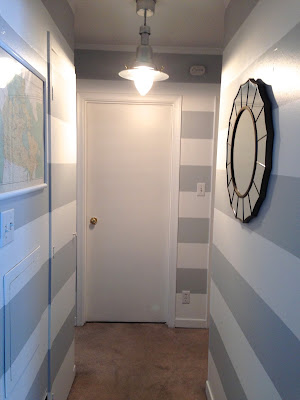 I was on the hunt for two things in this hallway, a mirror and a map. I got this map that has amazing colours in it from a antique mall for $24.99 before I even bought the house. The mirror is from Target and was $29.99.  Light fixture from Ikea for $59.99.

I love the stripes, but I would like your opinion.  Let me know what you think of the finished project. 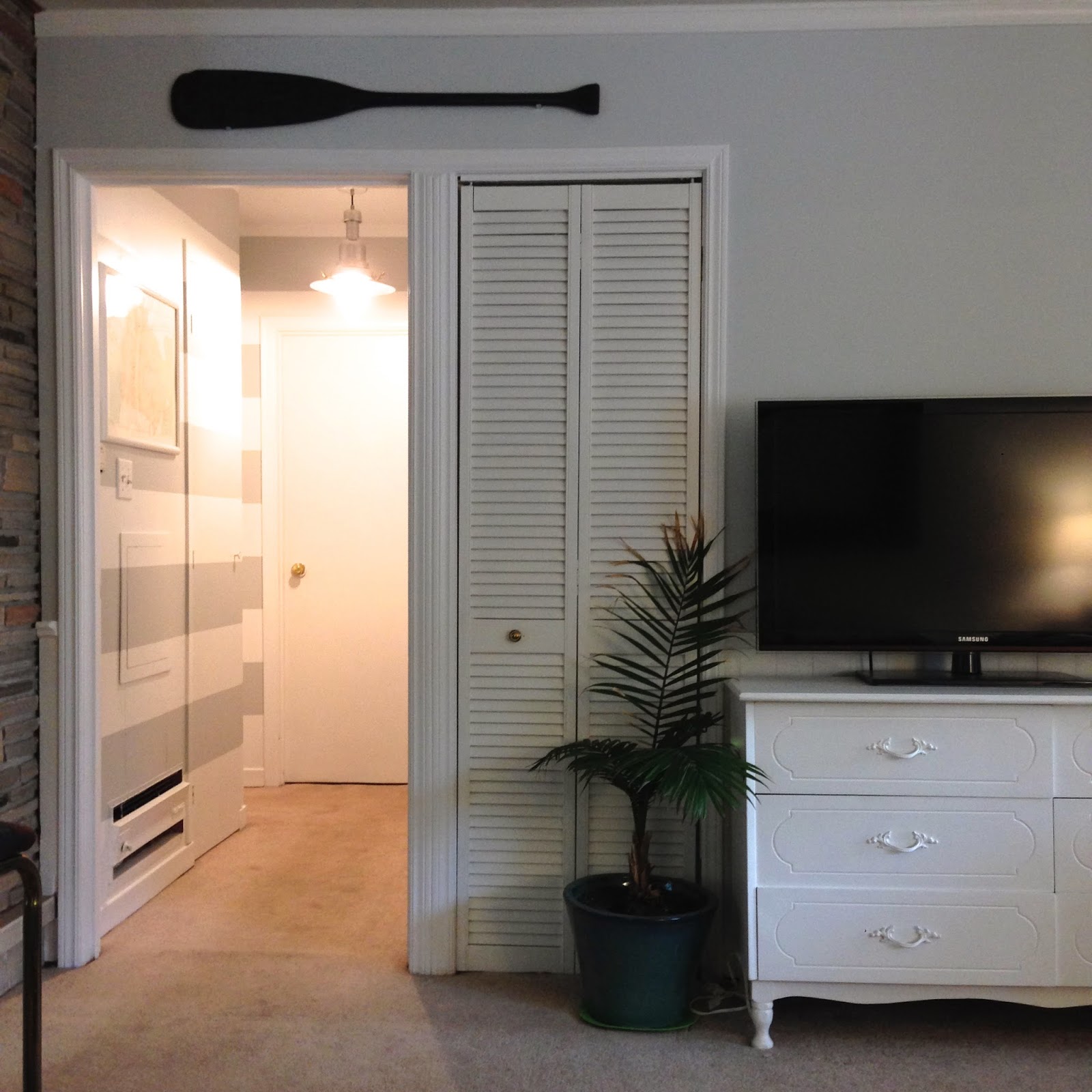 Posted by SomethingFromNothing at 10:45 AM